KEY TAKEAWAYS FROM THE LATEST CHAPTER IN THE MARVEL CINEMATIC UNIVERSE

As of this writing, Avengers: Endgame has already drawn more than $2 Bn in worldwide box office gross, completely shattering preexisting records on its debut weekend. Having seen it and appropriately geeked out over it, we couldn’t have imagined a more fitting ending to the 11-year, 22-film odyssey. The film not only lived up to the hype, it somehow managed to take a sprawling narrative of dozens of characters spanning dozens of movies into a fun, surprisingly affecting finale.

And before you ask, yes, some of us are already planning to go see it again.

With all of the hype leading up to the movie’s release and so many theaters still running full back-to-back showings to mitigate the film’s three-hour runtime, we thought we’d take a closer look at the fans who packed into theaters over the movie’s opening weekend to see who they were and what advertisers should know about them.

In order to do this analysis, we monitored foot traffic in more than 400 theaters across the US, covering everything from indie theaters to large multiplexes in Atlanta, Chicago, Denver, Los Angeles, and New York and, using our location-targeting and tracking platform, Motion, looked at the consumers who made it to those theaters between April 24th and April 28th.

Roughly 85% of moviegoers visited a theater once over opening weekend, and another eight per cent were hardcore enough to make multiple trips to see the movie a second time. (The remaining seven per cent or so either worked at the theaters or lived right next to the theater.) This totaled about 850 thousand distinct targetable consumers and just over three million foot traffic events.

Of those consumers who made a return trip to the theater on opening weekend, 86% visited the same theater. Those who went to a different theater usually traveled further the second time.

Marvel movies are all about spectacle, and consumer activity on Endgame’s opening weekend bore that out. Most consumers were willing to travel eight to 10 miles further to see the film at a large multiplex-style theater for a better cinematic experience. As a result, some of those theaters – AMC in particular – committed to staying open 24 hours to accommodate the demand for increased showings.

As a result, we didn’t see the expected change in foot traffic for theaters from the weekday to the weekend, as moviegoers we’re just as likely to be seeing the movie at an early showing. And moviegoers were more likely to see morning shows on Thursday and Friday than on the weekend, indicating that a significant number of fans took time off from work to see the movie before anyone else. 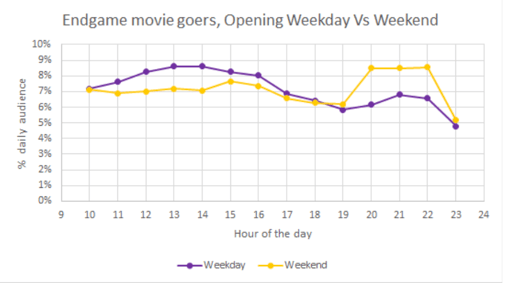 Measured foot traffic for Endgame by hour and day

Based on the number of times they saw Endgame during the opening weekend, the kind of theater they visited, the types of TV shows they watch, and their online search activity, we can break the Avengers: Endgame audience into three distinct clusters.

These fans went to the movies more than once over opening weekend and searched for Avengers-related content before and after they saw the movie.

The most loyal of Marvel fans, these are the fans who made it a priority to see Endgame as soon as possible to avoid spoilers and claim bragging rights, even if it meant taking a day off work to catch an early morning showing. Nearly four out of five of the fans in this audience (78%) saw the movie on Wednesday, Thursday, or Friday, and didn’t wait for the weekend to roll around. More than half (62%) saw the movie in an early or afternoon showing (before 4pm).

Fans in this audience skew male (55/45 M/F) and are heavily engaged with entertainment and celebrity content online, and were three times more likely to interact with related content after the film’s premiere on April 22nd. They were among the most curious when it came to reading fan theories, watching cast interviews, and following updates on news or previews of the movie. They’re also the most likely to engage with comic book content, being 3.3x more likely than Enthusiasts (see below) and 17x more likely than casual fans to search for or engage with content around Marvel comics and merchandise.

Marvel Cultists skew young, with 73% under 35 years of age, over-index to employment in the finance and technology sectors, and have an annual household income over $75k USD. More than one third of moviegoers in this audience (37%) have young children in their household, though they weren’t about to let that stop them getting to the theatre.

These fans went to the movies at least once over opening week/weekend and had fewer than 10 searches related to Avengers content before and after seeing the movie.

Marvel Enthusiasts are generally fans of the Marvel Cinematic Universe, but considerably less aggressive than their Cultist counterparts. Most of the moviegoers in this audience saw the movie once, on either Saturday or Sunday of the opening weekend. Consumers in this segment were more likely to be sports fans, watching sports on TV and checking scores online, but were also still likely to engage with movie-related content online prior to release.

Fans in this group are the most likely to be female – more than half (54%) are women. The majority of consumers in this segment (68%) are between the ages of 25 and 44, and these consumers tend to over-index to employment in the legal and technology sectors. As a result, they tended to have the highest average household incomes of our movie-going segments (often over $100k), and they were more likely to have children old enough to attend a screening with them. The average age of children in these consumer’s households was between seven and nine.

These fans may or may not have been to a theater but have had multiple, notable interactions with Avengers-related content online.

Consumers in this audience skew male (53% are men) and are general entertainment buffs who like to keep up with trending topics, be it the latest Avengers movie, the latest episode of Game of Thrones or even the royal wedding. Only one fourth (27%) of the fans in this group visited a theater to see Endgame during its opening week, with the majority of those visits occurring during the weekend.

In terms of content consumption, fans in this category interacted with Avengers-related content prior to the movie’s release, albeit at lower levels. The majority of the content they interacted with was on the news and lifestyle-related domains. Fans in this group skewed older, with a larger proportion of 35 to 44-year-olds, and consumers in this segment over-indexed to employment in the retail and marketing fields.

Since Thanos’ famous snap at the end of Infinity War last year, Marvel has cultivated a rabid fanbase eager to learn whatever they could about the fate of their favorite characters in Endgame. Before the movie even hit theaters, fans generated over five million social interactions on Reddit in the month leading up to the release.

The build-up wasn’t without drama, however. In the week of the movie’s release, several clips from the movie were leaked online, causing an explosion of activity and emotion on social media, with roughly 300,000 responses generated on Twitter and Reddit immediately following the news of the leak. This was repeated when the entire movie was leaked just two days after the premiere, sparking new discussions on the nature of spoilers and the impact of piracy on the enjoyment of films. Despite all this, the excitement for Endgame remained strong, driving historic ticket sales for what is likely to be the highest-grossing film of all time.

For advertisers, the Endgame opening weekend audience represents a key opportunity to target the kind of pop culture fans who will create early buzz and excitement around new products and releases. By looking at how the opening weekend audience varies according to habits, age, gender, and fervor, advertisers can better identify how to reach each group, and in ways that will drive more excitement for their own pop culture and brand experiences.

If you’d like to know more about reaching these audiences and how we found them, feel free to contact us directly.